On Feb. 10, the U.S. Soccer Federation's National Council will vote to elect a new president. It will mark the first time in 12 years that the USSF will not be led by Sunil Gulati. Along the way, the failure of the U.S. men's national team to qualify for the 2018 World Cup has created a chaotic, fragmented race, with eight candidates vying for the job.

When the USSF's Annual General Meeting (AGM) took place last March, all seemed well in Gulati's world. He had been re-elected, and the USSF approved changes to its bylaws that imposed, among other things, term limits. Critically, the changes allowed for a transition period that enabled Gulati to run one more time if he wished.

But a few months later, the first challenges to Gulati were beginning to germinate, as Steve Gans and Paul Lapointe announced their intentions to run. In September, the respective candidacies of Gans and Lapointe were made official. It marked the first time since 1998 that the election of a USSF president would be contested.

The USSF was also coming under increasing fire on the legal front. On Aug. 3, Miami FC of the NASL and Kingston Stockade FC of the fourth-tier National Premier Soccer League filed a claim with the Court of Arbitration for Sport asking for an arbitrator to compel the USSF to implement a system of promotion/relegation. The North American Soccer League later announced that it was filing an antitrust lawsuit against the USSF, alleging that it conspired with MLS and SUM to put it out of business. The catalyst for the suit is the decision by the USSF to deny the NASL Division II status for 2018.

That proved to be just the beginning of the chaos that would engulf the USSF and the election.

Oct. 21, 2017: Former U.S. international Eric Wynalda announces at the midyear meeting of the U.S. Adult Soccer Association -- an organization whose delegates comprise just over 25 percent of the vote in the election for USSF president -- that he will run for the position.

Nov. 1, 2017: Paul Lapointe, a soccer entrepreneur and administrator from Massachusetts, announces that he will enter the race.

Nov. 2, 2017: USSF vice president Carlos Cordeiro tells ESPN FC that he will run for USSF president, causing a rift with longtime friend Gulati, who declines to state whether he will run but continues to meet with various delegates to gauge their support.

Nov. 4, 2017: An injunction filed by the NASL seeking to have its Division II status reinstated is denied in U.S. District Court. That decision is currently being appealed.

Nov. 10, 2017: New York-based attorney Mike Winograd announces that he will enter the race.

Nov. 19, 2017: Sources tell ESPN FC that Donovan will not run for USSF president. He later tells SI.com that he is "not remotely qualified for that job" and "there are better ways for me to be helpful and impactful." 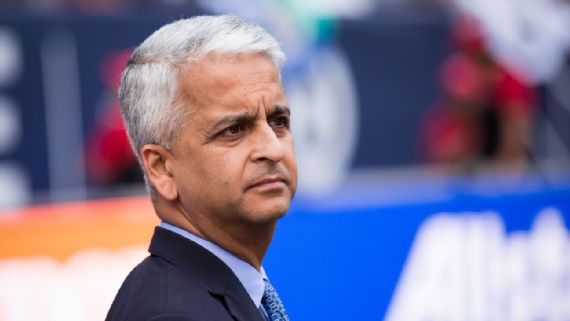 Nov. 27, 2017: The USSF-mandated deadline for organizations to rescind nomination letters and give them to another candidate passes. At this stage, Gulati -- who has yet to announce his intentions -- possesses nominations that run well into double digits.

Dec. 4, 2017: Gulati tells ESPN FC that he will not seek a fourth term as USSF president.

Dec. 5, 2017: Soccer United Marketing president Kathy Carter announces that she will run for the post. Sources tell ESPN FC that she is doing so at the urging of Gulati and MLS commissioner Don Garber, something Garber and Gulati deny. In a subsequent interview with ESPN FC, Garber confirms that MLS will support her candidacy.

Dec. 10, 2017: The deadline for candidates to officially inform the USSF that they are running is reached. Candidates must have at least three letters of nomination from an approved list of USSF-affiliated organizations, and they must pass a background check.

Dec. 13, 2017: Cory Roth, an attorney working on behalf of the youth club the Westside Timbers, files an antitrust complaint to the U.S. Department of Justice against the USSF. The complaint alleges that Gulati sought to delay the hearing of cases before FIFA's Dispute Resolution Chamber related to payment of training compensation and solidarity fees for U.S. players signed by overseas clubs.

Dec. 14, 2017: Sources tell ESPN FC that at the most recent USSF Board of Directors meeting on Dec. 10, the Board made it clear that the position of president would return to being less of an executive position and more of a Chairperson of the Board. Several candidates took issue with such a move in the middle of an election. The Board also took the first steps toward creating a director of national teams position that would oversee on-field matters, including the search for a new men's national team coach.

Dec. 29, 2017: A report from SI.com reveals that Gulati, despite saying he had yet to endorse any candidate, arranged and attended a dinner that month with the heads of the Eastern New York Soccer Association and New Jersey Soccer Association, where they were introduced to Carter. Garber, who earlier said Carter would have to win over state associations "on her own," was also in attendance. Carter receives the endorsement of the two associations just days after the dinner.

Jan. 3, 2018: In an interview with SI.com, Wynalda discloses that he has received financial backing from Riccardo Silva, owner of the NASL's Miami FC.

Jan. 8, 2018: In another blow for the already reeling U.S. men's program, Univision reports that U.S. youth international Jonathan Gonzalez opted to represent Mexico at senior level. He later makes the move official by filing a one-time switch with FIFA.

Jan. 8, 2018: In his response to a survey from the USSF's Athletes Council, Martino asserts -- without providing any evidence -- that SUM controlled the decision to stage the U.S.-Costa Rica World Cup qualifier at Red Bull Arena in September in Harrison, New Jersey. Martino stated that the motivation for the decision was to prioritize profit by drawing a large number of Costa Rica fans. The U.S. lost the game 2-0. The USSF, SUM and Carter later issue strong denials, going so far as to call Martino's allegations "categorically false." Martino later clarifies his remarks in an interview with SI.com to say that he wasn't accusing anyone of unethical behavior and his allegation was based on conversations with people "close to decision-makers."

Jan. 14, 2018: The USSF Board of Directors meets and approves a proposal related to the voting breakdown of the Professional Council. The proposal -- put forward by MLS, the United Soccer League and the National Women's Soccer League but opposed by the NASL -- allocates nine of the 16 delegates to MLS, three to the USL, three to the NWSL and one to the NASL. This gives MLS control of 14.5 percent of the overall vote in the USSF presidential election. The Board also votes to give the USL the status of a Division II league for 2018.

Jan. 30, 2018: Solo files a complaint with the U.S. Olympic Committee alleging that the USSF is in violation of the Ted Stevens Olympic and Amateur Sports Act. Solo states in her complaint that "because of the power, prestige, status and money flowing from the Federation's alliance with Major League Soccer and Soccer United Marketing, the USSF's priority has become protecting and building the MLS, at the expense of our youth, the women's game and our place in the global game." It later emerges that the law firm that drew up the complaint also represents Rocco Commisso, owner of the NASL's New York Cosmos.

<strong: The North American Soccer League escalates its legal battle with U.S. Soccer, filing a lawsuit alleging the directors on the USSF board have acted to protect personal interests. The suit states that board members, motivated by conflicts of interest and economic considerations, breached their fiduciary duties to the NASL by "arbitrarily refusing to sanction the NASL as a Division II league for the 2018 season" -- a decision allegedly made to protect the board members' self-interested positions in Major League Soccer and the league's marketing arm, Soccer United Marketing.</strong